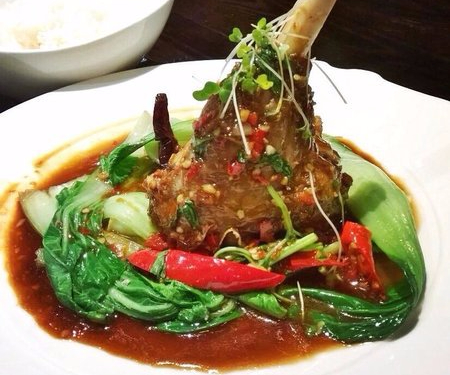 I love Thai food and have a particular penchant for cooking it from scratch and seeking our good Thai eateries. Sukhothai, consistently listed in The Good Food Guide and being awarded by the Sunday Times as one of the top restaurants of the UK was an obvious choice to try.Having decided last minute to grab a table after an event in Leeds, it was nice that the team at Headingley were accommodating. We were led to a very pleasant table in the window by a tiny and wonderfully smiley traditionally clad waitress.

Sukhothai is an independent group of four restaurants in Leeds and Harrogate and the word is, it’s the home of authentic Thai cuisines. Since the venture began in 2002, Head Chef and owner Ban Kaewkraikhot has continued to win over a dedicated band of followers who confess to love her unique and innovative approach to the menu coupled with an exceptional welcome and levels of service.

Recently refurbished, the standard of decor is high and displays all the touches you’d expect from a traditional Thai establishment. Dark wood, lowered ceilings, orchids and a resident centrepiece Buddha; but with high end additions like chandeliers and crispy, ever so white napkins. The surroundings and the atmosphere complimented the menu really well, which also boasts a mix of innovation and tradition. We chose to go with the suggestion of the chef, it’s great to do this sometimes and let them show off the dishes that they’re particularly passionate about.

The lamb shank was the purest, most delicious Thai dish I had ever had the chance to feast upon!

The first dish brought to the table was a tiered platter of mixed entrees which looked and stunning and dragged you ‘ready or not’ into the centre of flavours synonymous with Thai food. Home-made satay and sweet chilli dipping sauce served in pipettes served with grilled chicken, huge king prawns in tempura, chicken toast and filo ‘moneybags’ (Tung Thong) served with crispy noodles. It was suggested we take a Thai salad (Som Tum) accompaniment which turned out to be a good option to clean the palate with a refreshing chilli heat with lime and lemongrass coating shredded papaya, vegetables, dried shrimp and peanuts.

The next course was as surprising choice as chef had decided to steer us away from traditional green curry, Massaman and pad Thai. An almost majestic dish of  lamb shank towering from sticky coconut rice and a complementing chicken and pineapple curry provided an overwhelmingly complex, yet spectacular flavour combination. Personally, and I declared this publicly on my social media channels whilst I ate (so true it must be) the lamb shank was the purest, most delicious Thai dish I had ever had the chance to feast upon!

Dessert was a heat calming, palate cleansing green tea ice cream with banana fritters this merged easily into coffee with milk served in cow shaped jugs. Another little touch that confirms the inherent need to make an impression. A damn fine one it is too.