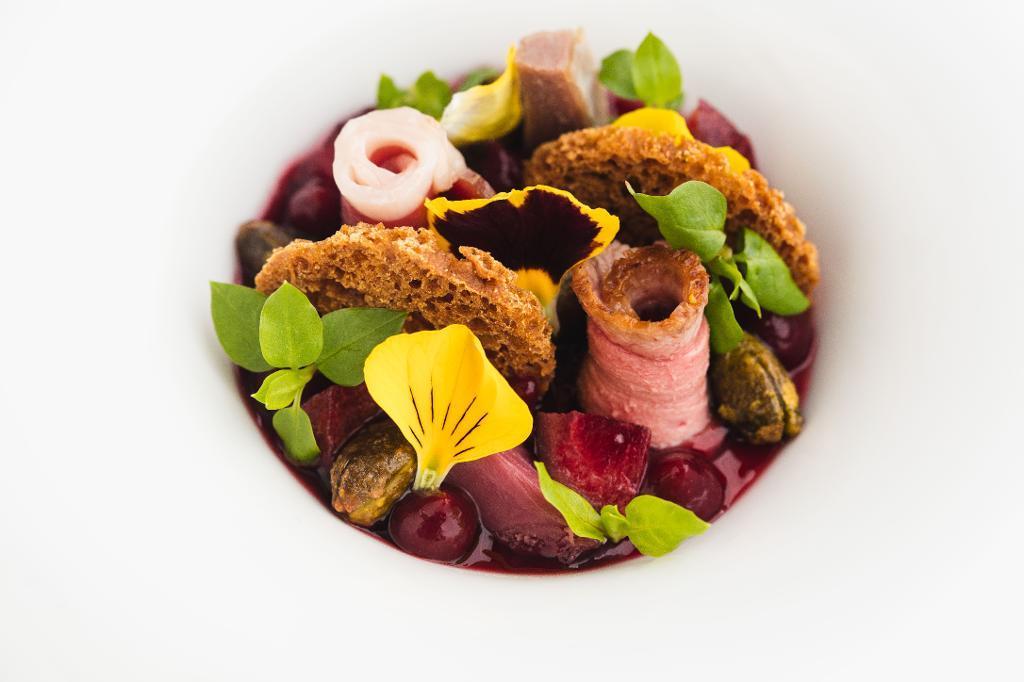 Bohemia at the Club Hotel & Spa, Jersey is listed as one of the best restaurants in Britain. It’s the highest rated Michelin Starred restaurant to be featured in the Waitrose Good Food Guide as well as being listed in The Sunday Times Top 100 Restaurants, with special praise being given to its desserts which were listed ‘6th Best in the UK’.

Head Chef Steve Smith has taken Bohemia to new levels since joining over two years ago having created a truly outstanding dining experience with his ingredient and flavour driven tasting menus. Celebrated by the world’s most hardened critics, having held a Michelin star for over ten years, he has retained Bohemia’s Michelin Star and been awarded 4AA Rosettes.

On a recent wintery weekend when the only thing to do is eat good food, we flew over to the Jersey hotspot to try the revered culinary experience for ourselves.

Our table is booked for 8.30pm and the dining room has plenty of people at different stages of their meal making for a good atmosphere. There are couples and groups alike and most tables ooze a contagious sense of anticipation as we pass to be seated at ours.

Dishes here are a kind of theatre, described by other chefs as “tradition, startlingly reworked” and we choose the Prestige tasting menu to help us understand the concept.

Taste and texture sensation start with the aperitif. French onion panna cotta and a mussel tartare followed by a pink grapefruit sorbet to cleanse. Flavours explode from the off leaving us waiting for the first course with bated breath!

We are not disappointed by the unusual shiitake mushroom ice-cream which follows draped luxuriously over truffle dusted quail egg. Next up textures of cucumber in the form of foam and spheres as well as its natural state with fennel brings local oysters to life in a delicate and beautiful dish.

Crab is served two ways next; white meat tartare with micro coriander and mango alongside a brown meat jelly with mango. The pair are laid down on the table majestically and look too pretty to eat. This was one of many real stand out courses for me.

Not usually fan of foie gras, I had no resistance to the smell of it whipped into a cream and served with smoked and aerated duck on a  toasted brioche finger. Whilst I didn’t partake, diners seemed to enjoy the delicacy.

Chef’s signature dish of roasted scallops with textures of apple, celeriac truffle, smoked eel and a truffle vinaigrette was a whole act of its own and was a serious contender for stealing the show indeed. Using classic ingredients in an innovative way and serving with white gloves and a glass dome which added an extra touch of sophistication made it very memorable.

The dishes kept coming as did the wonderment at the invention of flavours. Wardolf salad with a tangy apple sorbet made for an interval. A time to reflect on the first half whilst being awakened and refreshed with a kind of dancing going on on the tongue.

The Anjou pigeon was also impressive, served as a trio of delights; smoked leg on a bed of straw, a roast breast and pastrami on toast.

Pre dessert, second pre dessert and dessert were each a grand finale to the experience and prelude to the most delicious Paris Brest and selection of hand- made chocolates to compliment carefully chosen local coffee.

Bohemia really is all about an exceptional dining experience with all emphasis on bringing something memorable with every course. The service shares centre stage as expected with staff passionate and engaging and forthcoming with opinions and suggestions which I particularly like.

Overall, an excellent meal in modern and comfortable surroundings with a very capable team on hand. There’s no doubt we’ll be reserving a table on our next visit to Jersey.

Don’t forget to book in  advance!