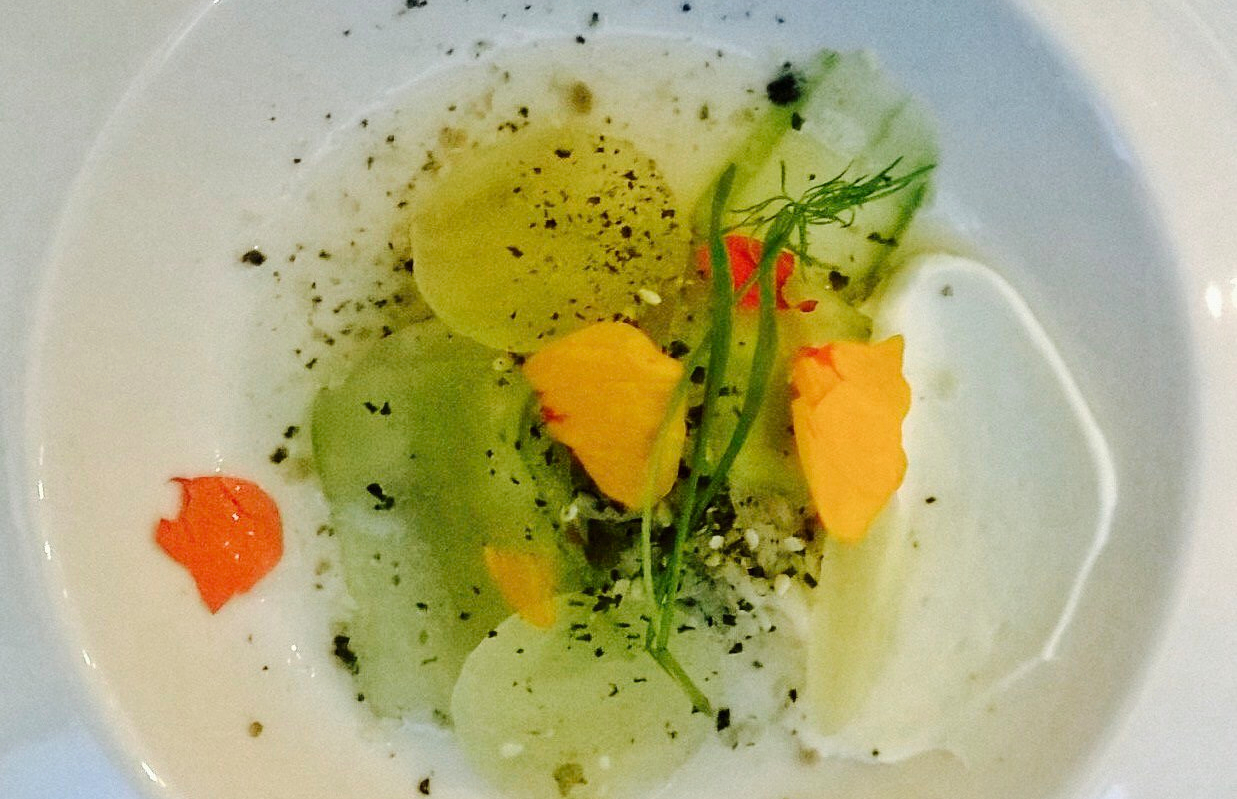 Watching Alex Bond on Great British Menu brings back great memories. Owner and chef Michael Price invites Alex Bond for a one night only kitchen takeover and I’m invited. The event was to support Alex -now a Michelin star holder in his journey to the opening of his own restaurant Alchemilla, Nottingham. Alex gained his stripes working under some of the most talented chefs in the UK.

You’d be forgiven for living in the same town as but knowing little of the Gourmet Dining Room for its net is cast far and wide when it comes to the foodies it attracts. People who eat here know what they like and its innovative and outstanding dishes are presented beautifully with a huge side of excellent service. The kitchen and dining area here are one of the same. High ceilings and full length windows give ample room, light and air allowing diners to relax, watch the chef at work and become involved in the whole service.

Michael Price describes what he does as unique. “We offer a dinner party experience but with really great food. We have a truly open plan kitchen that seats 22 diners so it really feels like you are eating in our house.

The events we run are just myself cooking and my wife Toni who runs front of house, it’s important that people feel relaxed and not uptight as you can feel in traditional fine dining restaurants.”

Michael has a real following and when he took the decision to support fellow chef Alex Bond in his quest, the extra night was welcomed as aside this, the next available booking is over six months in advance!

Michael and Alex met through a mutually respected chef Anthony Flynn when Alex worked as his sous chef for two years after starting out under Jeff Baker at 42 The Calls in Leeds. Moving on to Nottingham Alex spent three years at 2 star Sat Bains. Gaining experience and momentum, Auberge Du Lac in Hertfordshire was Alex’s last time as Sous Chef before becoming Head Chef at Michelin starred Turners in Birmingham.

Alex Bond really is one to watch, having worked in Michelin starred kitchens for twelve years, the 32 year old now feels it’s time to bring the talent and skills he has honed into his very own kitchen. Alex will launch Alchemilla in Nottingham in August -a project that’s been over two years in the making and is sure to be an exciting development.

Alex describes his cooking style as Modern British. He says “by that I mean that nearly everything I cook with is British. Fish, meat, vegetables. I still use some foreign produce like lemons and chocolate but in the main, British.”

He continues “I’d say the food is creative, sometimes challenging, with big bold flavours. I’m a big guy and I think that reflects. It’s not delicate. I like everything to taste if not more so of what it is. I want people to smile when they eat my food. It’s to be enjoyed.”

And he certainly achieved that at the Gourmet Dining Room. From the moment the food started to be prepared the room was filled with delicious fresh smells and when it arrived it certainly delivered on presentation. Amazing flavour and innovation were the words emanating from every table as fellow diners started with sourdough bread with cultured butter and rendered pork fat with a drizzle of oregano oil followed by amuse-bouche.

The most tender raw beef paired with smoked cod roe was a delight that almost melted in the mouth. The smoke came through perfectly and complimented the beefs rich flavour. Crab guacamole was a deep fried crab cracker filled with the flavour of freshly caught crab topped with creamy avocado. A light parmesan doughnut with a full flavour crumb completed the trio of delights.

Next, a combination which was new to me adorned the Gourmet Dining Rooms specially commissioned plates. Scallop served ceviche alongside lightly picked green strawberry was different in a wonderful way. The layers of flavour created were memorable as sour gave way to sweet from chamomile cream and citrus from the dusting of grated lime.

Keeping the seafood theme for the next dish a combination of crab, apple and yoghurt nestled delicately in the centre of a pure white dish. Cucumber water and kombucha (a sort of fermented Chinese tea) were poured over like a soup that collected from everything it touched on its journey to the bottom of the dish to pack flavour a punch that was far from its delicate image.

Even the palate cleanser between this course and the next served to wow. The lightest whipped salted feta cheese with tomato seeds and puffed rice was finished with pickled elderflower.

I am a big fan of what was served for main course, but I haven’t eaten ox tongue served quite as tender as this. Roast and smoked to perfection the tongue was served with different preparations of onions –caramelised, roast and puree. The tongue had been slow roasted and it showed that the almost crisp outer layer gave way to melt in the middle tenderness inside. Gremolata and a cream made from the cooking oil finished the dish beautifully.

A cross-over fusion of hay mousse, granola and a tarragon sorbet prepared us for desert with another unexpected flavour combination that once again just worked. The first desert Alex prepared was strawberries with a rocher of lemon verbena and black olive. The second; blackened pineapple with kefir cream to give a sour edge to the sweetness for a pineapple sorbet. Ash from the burning of the pineapple skin garnished and added extra smoke.

Alex’s dishes have many elements and his combinations are unique, imaginative and colorful. Seeing him in the kitchen, the way he works reflects how he feels about feeding people. He is passionate, artistic and moves like a great composer over his dishes tweaking to perfection before allowing them to leave the pass. From beginning to end, Alex’s food was utterly faultless. Yes, I say it again, Alex Bond is definitely one to watch and when his restaurant opens, I will certainly making a booking… I’ve a feeling I’ll be seeing most of my fellow diners from this event there too.

In describing the restaurant he aims to create, Alex says; “I just want to cook, it’s my life. As far as plans for the new venture, it will occupy a former Victorian coach house in Nottingham that hasn’t been used for over 100 years! The space is undergoing an extensive renovation and when finished will seat 40 people along with a ten seater chef’s table.

“I want to retain all the features of the building explains Alex. So we’re going to have a concrete floor, exposed brick, raw wood, loads of greenery and metal creating this amazing juxtaposition with the elegance of the food and crockery.

I’m a big fan of vegetables so I have developed a style of cooking that is plant based. Vegetables can be just as good as any piece of meat, I’d like to show the depth of flavour that you can achieve when you allow them to take centre stage, with a few supporting ingredients.

I want to build a regular trade and a busy buzzing vibrant place that people love to come and drink. There’ll be a large bar open to all offering different cocktails using our culinary knowledge, a comprehensive wine list and craft beers.

There will also be a food offering in the bar serving some funky snack type dishes to go with drinks.”

Plans for The Gourmet Dining Room

When asked what’s next for The Gourmet Dining Room Michael Price says; “We travel extensively and I am connected to many chefs globally so we try and keep ahead of the latest developments and food trends, we don’t ever want to stand still and become stagnant.

We like the Supper Club format, I personally prefer it to having a restaurant so we don’t have any plans to change that. The hardest thing for any chef who takes their job seriously is being creative, moving things forward and making sure you stay relevant, with this in mind I am planning to do some “Stages” next year in the kitchen of chefs I greatly admire in the Basque country. I am in the process of negotiating this at the moment.”